My Workers Compensation Settlement- Can My Spouse Get it in a Divorce? 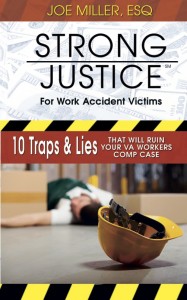 Unfortunately, one of the issues that often comes up with respect to workers compensation cases in North Carolina is the issue of whether or not any part of a workers compensation settlement can be claimed by the non-injured spouse as part of a divorce/equitable distribution proceeding.  We say that this is unfortunate because it is simply a fact that the severe injuries and loss of income suffered by an injured worker often place a tremendous strain upon a marriage. If the injuries are truly incapacitating, it often becomes too much of a lifestyle change for the non-injured spouse to bear.  Faced with the day-to-day challenges of caring for someone who is no longer able to provide an income, sometimes, sadly, the non-injured spouse simply chooses to seek what they perceive as an easier life, and that spouse may leave the marriage. Then, to make matters worse, the non-injured spouse may feel that because he or she was “inconvenienced” by being required to contribute to the care of their incapacitated spouse, that he or she is now entitled to a share of whatever recovery the injured spouse may receive, or will receive, as final settlement of their workers compensation claim.

Before we discuss the law on this issue in North Carolina, we cannot emphasize enough that if you are caught in this situation, the first thing that you need to do is to hire a good North Carolina divorce attorney.  Although we will touch on the basic law as it currently exists in North Carolina on this issue, each and every case is going to have nuances and subtleties that may be the difference between the non-injured spouse getting a significant portion of the award, or getting nothing.  Only a divorce attorney who is intimately familiar with the case law, and has experience handling equitable distribution cases in North Carolina, is going to be able to advise you properly with respect to how each of these nuances may influence your case.  Therefore, there is no question that if you have been injured on the job in North Carolina, and your spouse has separated from you, or you have undergone a divorce, and you anticipate that you are going to receive a settlement in the future, or, you have received a workers compensation settlement, and your former or estranged spouse is trying to get a piece of it, the first thing you need to do is to consult with, and hire, a good North Carolina divorce lawyer.

That being said, let’s talk about the basic law in North Carolina on this issue.  The main case which established the law regarding whether a non-injured spouse can obtain any of the injured worker’ s compensation award as part of an equitable distribution was the North Carolina Court of Appeals case of Freeman v. Freeman, 421 S.E. 2d 623, 107 N.C. App. 644 (1992). What that case basically says is that what matters is what the workers compensation award or settlement is for.  Any part of the settlement which replaces income or medical expenses that would have come in or been incurred during the marriage before the separation, is marital property, and the non-injured spouse may be entitled to a part of the award or settlement.  Conversely, any part of the award or settlement that is for permanent disability or future medical expenses that occur after separation, would be the injured spouse’ s separate property, and not subject to distribution to the non-injured spouse.

If, on the other hand, the award or settlement occurs after the date of separation, than the non-injured spouse does not get the benefit of this presumption of marital property.  The presumption is that it is the injured spouse’s separate property.  It then becomes the non-injured spouse’s burden to prove that award constitutes marital property to the extent that it represents compensation for economic loss occurred during the marriage, and prior to separation.

Confused yet?  Maybe we can try to make it real by taking a look at what happened in the Freeman case.  In that case, the husband was the injured spouse, and he received a workers compensation settlement of $32,500.00 about two months before he separated from his spouse.  The trial court found that because the settlement was all for the husband’ s loss of use of his arm and permanent disability, it was his separate property.

But—the Court of Appeals said ‘wait a minute, not so fast.’  As we discussed above, the Freeman Court held that because the award occurred before the date of separation, there was a presumption that it was marital property.  In this case, therefore, the Court of Appeals said that it became the husband/ injured worker’s burden to show that the award was for the husband’s loss of earning capacity and future losses which were to occur after the separation.  Because the husband had put on no evidence whatsoever at trial as to what part of the award was for his loss of earning capacity after the separation, the Appeals Court sent the case back to the trial court so that he could present such evidence in accordance with their ruling.

The bottom line on all of this is that you need to consult with a good North Carolina divorce attorney.  In addition, it becomes clear that you may have an easier time if the separation from your spouse clearly occurs before you enter into any workers compensation claims are or settlement agreement.  The presumption that the settlement is your separate property will then reside with you, and not the non-injured spouse.

If you have further questions or would like a free consultation, please call Joe Miller toll free at 888-694-1671 or contact us online.